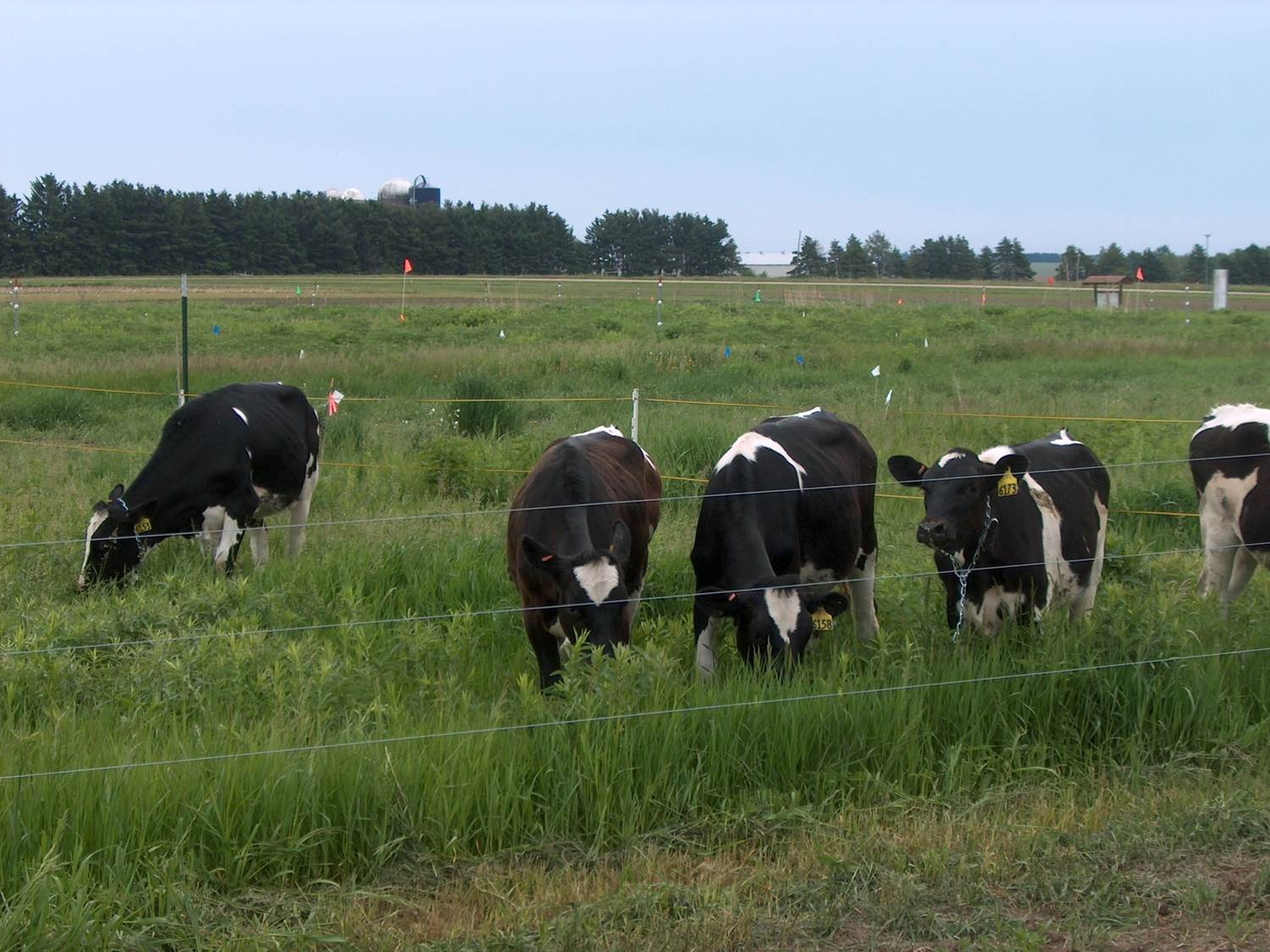 The Wisconsin Integrated Cropping Systems Trial (WICST) was
established in 1989 in response to farmers and others making a case for
long-term research on low-input farming. WICST set out to investigate
both the benefits and limitations of alternative agriculture through replicated
research on the productivity, profitability and environmental impacts of both
sustainably and conventionally managed production systems. Read More>>

What is WICST, what have we learned in 26 years, and what are the big questions for the 21st centure? Read More>>

Dairy heifers that were raised on pasture in the ongoing Wisconsin Integrated Cropping Systems Trial (WICST) performed as well as or better than similar heifers that were raised in confinement. In this study, not only did heifers on managed pastures match the weights and age at first calving of their confined counterparts, but they also outperformed the confinement heifers in terms of average daily gain (ADG) during the pasture season and milk production in their first lactation. Read More>>

Farms provide the food, fiber and energy that people need. Farms also benefit society by providing services that may not earn money, but support functioning of the ecosystem (see sidebar at right). For instance, farms can provide carbon sequestration, water purification and wildlife habitat. The extent to which they provide these services depends on their management. Increasingly, society is considering paying farmers for services that regulate climate or purify water. For instance, developing carbon markets might pay farmers for practices that sequester carbon in soils. Read More>>

Grain farmers can help the environment by expanding their corn-soybean rotations to include additional crops. Research has shown that expanded rotations can reduce the need for pesticide and herbicide applications by breaking the life cycles of insects, weeds and diseases specific to corn and soybeans. In addition, grain yields often increase in the longer rotations. Can expanded grain rotations also result in an increase in specific grain characteristics to generate more income? Read More>>

The Wisconsin Integrated Cropping Systems Trial (WICST) project was born in response to dissension within the agricultural community between those who feel the United States has the most successful food production system in history, and those who consider it unsustainable in one or more aspects. To frame the debate somewhat simplistically, on one side are the proponents of conventional agriculture who feel that the production practices adopted after World War II — the widespread use of purchased fertilizers and pesticides — have given us a highly productive and efficient system that needs no apology. On the other side were those who believe that agriculture is in need of fundamental changes. Read More>>